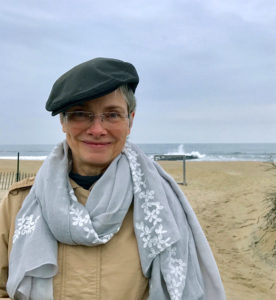 Mary Groce’s lectures about Emory Conrad Malick begin with the story of discovering her great uncle’s records hidden in attic boxes at her cousin Aileen’s house back in 2004. She describes how six-year-old Emory and his white-skinned two-year-old sister Annie, her paternal grandmother, were separated in 1887 after their mother died of typhoid fever. She reveals the photo she found of Emory on his letterhead, and her amazement at realizing that 1) she had a great uncle, 2) he was one of the very first pilots, and 3) he was black. She includes a brief history of black aviation, and explains how Emory fits into the timeline as being the very first. Mary describes her quest to uncover the truth about her great uncle’s life and his accomplishments as the first aviator to fly over central Pennsylvania (1911), the first licensed black pilot (1912), the first African American pilot to earn a Federal Transport License (1927), a barnstormer, and a pioneer in aerial photography. She portrays Mr. Malick’s life in a Power Point presentation, including photographs and documents that were in his estate, as well as pictures and articles from several other sources, including family members, the Snyder and Northumberland County Historical Societies, the Archives of the San Diego Air and Space Museum, NASM, the Glenn H. Curtiss Museum in Hammondsport, New York, the Historical Society of Pennsylvania, the Library Company in Philadelphia, the Hagley Museum in Wilmington, and the State Archives in Harrisburg. She describes his early years in his homemade Curtiss pusher “aeroplanes,” his crashes and his triumphs, anecdotes about him written by her late Aunt Mildred, and first-hand stories that were told to Mary by her oldest relatives. She tells about Emory’s later years in aerial photography and his work in the Flying Dutchman Air Service with Ernie Buehl, who would later go on to assist Chief Charles Alfred Anderson, the Chief Primary Flight Instructor for the Tuskegee Airmen, in earning his Federal Transport License (1932). Mary tells of Emory’s 1928 letter to his sister Annie, describing his anticipation of imminent success in aviation; then she tells of the subsequent two crashes (possibly caused by sabotage), one of which had him declared Camden’s hero, and the other which ended his flying career. And she describes how Mr. Malick was “unsung and unheralded” at the grand opening celebration of the Sunbury Airport in his hometown, where he had been the city’s very first aviator, and where he should have been “the one deserving of highest honor,” according to an article in the Sunbury Daily Item (September 1, 1928). Then she tells of Emory’s death on a Philadelphia street in 1958, his body lying in the morgue for a month until the FBI was able to locate his sister Annie, Mary’s grandmother, who identified him and had him buried next to their mother and grandmother in Wolf’s Crossroads Cemetery, near the place of Emory’s birth in Northumberland County, Pennsylvania. And then Mary displays the 2011 article about Emory in the Smithsonian’s Air & Space Magazine, and the 2012 painting of him by renowned artist Stan Stokes.

The Celebration of Emory Conrad Malick has begun! Finally!